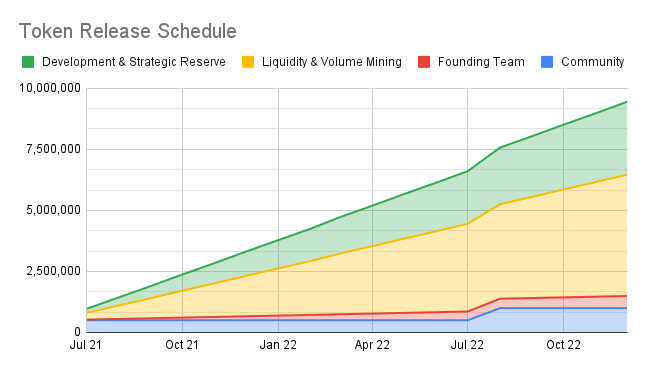 PAGE tokens will be distributed to ETH users via a network including TrustSwap locks and vesting contracts as well as three Gnosis Safe Multisig Wallets set up to automatically distribute tokens to partner destinations in the community, among PAGEDAO Founders, and in return for services WIPP will initially provide such as developing technology and marketing.

Particular beneficiaries of the PAGE development strategy will include 3 classes of miners: developers, liquidity miners, and volume miners. Volume and Liquidity mining will receive 50% of the token issuance over the first 1.5 years on the Ethereum network, this activity will continue until the assets are distributed or governance vote modifies this plan in some way. It is possible that a Cosmos launch will necessitate a restructuring of these incentives to reflect increased development timeframe and token supply modifications to reach an ever-increasing user base.

Decentralized Network Growth is a priority because it can protect WIPP’s team from any sort of legal liability associated with accusations of malfeasance, market manipulation, or token price control. It is important to make it impossible for the WIPP team to comprise a majority of the tokens which are intended to one day operate the PAGE DAO as a decentralized and democratic institution.

Projects such as LBRY and Publica have failed to adhere to the standards of decentralization and have paid the price of bringing Web2.0 ownership and control models into the Web3.0 space.

Not so with $PAGE, which will begin its life in the hands of a small startup with transparent intentions and, through community involvement, bloom into a powerful DAO based upon a Cosmos SDK network.

It is the explicit intention of WIP Publishing, Inc. to make the technologies available to the public as rapidly as they can be developed and to create a Cosmos-based token controlled governance structure which, when it reaches mainnet development, can structure everything needed for full DAO autonomy from the WIP Publishing Company and all other single entities, to be run in a fully decentralized manner and in accord with all laws and regulations which apply to such entities.

As such, the specific token distribution at this time is intended to include the following:

The NFTBook Bazaar will be the initial outlet for all things on the PAGE network but will by no means ever even attempt to secure exclusivity for itself in this field. Other suitable platforms may be developed, and these incentives may be adapted and modified, with the primary goal remaining the benefit and protection of the authors and readers these platforms serve.

Participation in these incentives will be open to all members of the public who care to learn how to do so safely, and to make it impossible for WIPP team members to monopolize the accumulation of these rewards, Founding Team and Development incentives will be paid out monthly over a vesting period of 1.5 years.

As a result, though the founding team will begin with a claim to 5% of the total supply of the token, WIP Publishing is limited to less than 50% of token distribution and will be forced by market and business conditions to distribute most of what it receives each month. This limited Founding Team reward structure and independence from WIPP for the token ensures that WIPP’s interests do not ever have the ability to monopolize, manipulate, or control the public network we intend to create.

30% of the token will be distributed to PAGE Network participants in return for specific development milestones. The initial plan will release the 30% development budget for the initial token issuance to the WIPP Company over the next 1.5 years; WIPP will be empowered to delegate this benefit to other contractors or hire subcontractors including via the exchange of PAGE through the Liquidity Pool infrastructure for ETH or another token to then exchange for USD or other fiat currency to compensate them for their services.

As a condition of this mutually beneficial arrangement, WIPP will do nothing to stop anyone else from using the PAGE network to build platforms to distribute NFTBooks on or off the PAGE network. This arrangement will incentivize the priority of the network and promote the continual development of ever-improving technological standards for the creation, transmission, and means for settlement of NFTBooks, which is the WIPP Company’s mission. WIPP recognizes that the public blockchain, if launch is successful, will form a DAO for the continuing creation and development of the PAGE network, the PAGE DAO.

The proposed initial allocation strategy of these tokens involves the primary goal of developing $PAGE, which will be primarily handled at least at first by the WIP Publishing Company on behalf of the PAGE DAO until such time as on-chain governance makes control via Cosmos possible. This allocation strategy can be changed at any time, but must always remain public knowledge.

In addition to new incentives being added to these pools from time to time, including investments from other DAOs or decentralization-oriented corporations or by issuance of more PAGE tokens, incentives can be tuned to deliverables (i.e., if a budgeted Staff position is unfilled, those tokens will be held in a strategic reserve pool along with any tokens collected by WIPP as fees or sales proceeds for distribution later).

The community of DAOs and decentralization-oriented corporations which will receive the 15% of total token supply allocated for the first 1.5 years will be allowed to vary over time. 3% will be issued in five Community Support Initiatives over the first sixteen months of operation, beginning in August 2021 and ending in December 2022.

The recipients of these grants can receive benefits upon completion of any requirements agreed upon by PAGE network at the time of the grant. At launch, NFTs representing varying amounts of $PAGE may be airdropped to organization grant recipients; afterward recipients will be able to dispose of the $PAGE in any means they see fit unless otherwise agreed upon prior to airdrop receipt.

5% is a sufficient pool of $PAGE to compensate the Founding Team for their time, love, and effort in bringing this project to life. The decentralization needs of the network we wish to create supersede our own in this case.

This $PAGE grant will vest over a period of 1.5 years, unconditionally, to approved wallets owned by the correct recipients. Once disbursed, granted $PAGE tokens can be spent, staked, LP’ed, traded, or otherwise disposed of in any way seen fit by the Founding Team Member endowed with the tokens. Unclaimed Founding Team token distributions will be held in the multisig and released on schedule when the relevant Team Member is located. Advisors will be compensated from this pool as well.